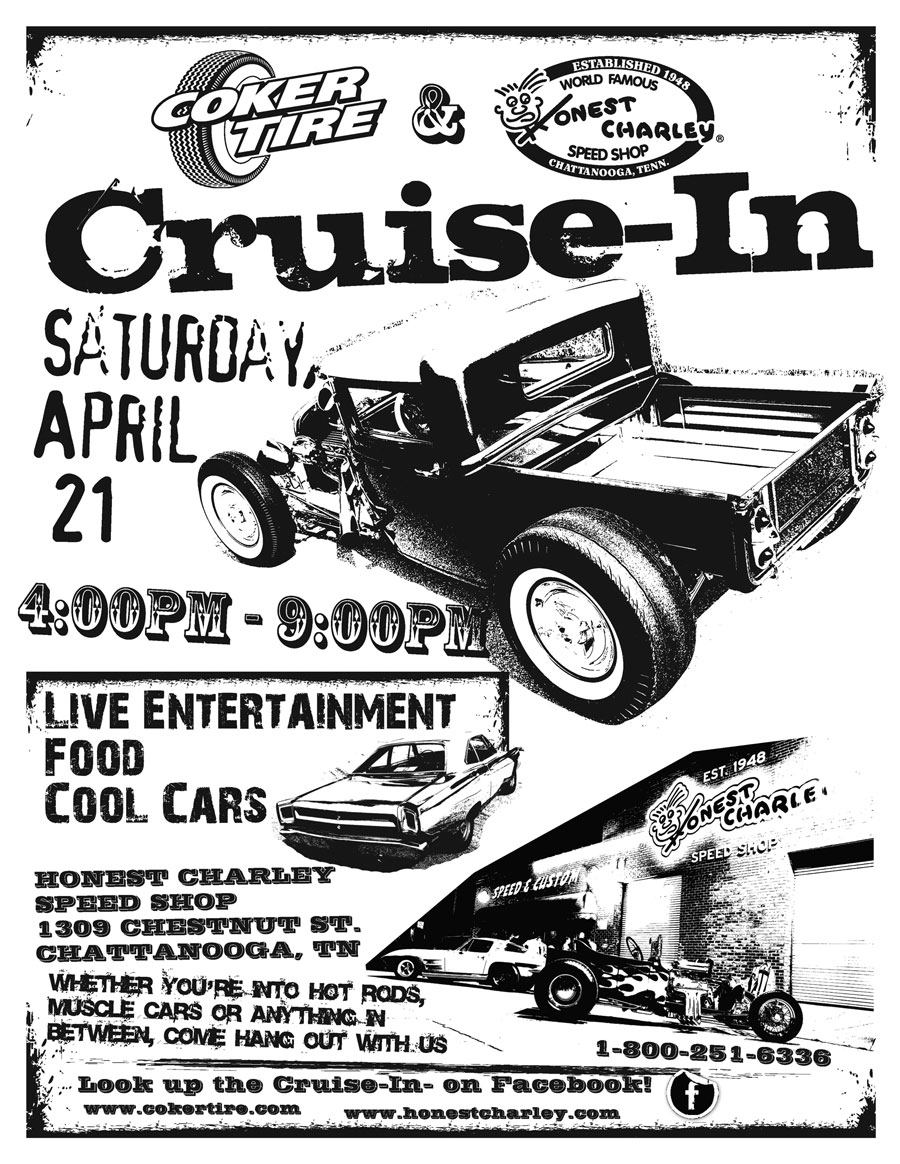 For those of you who came out for our Cruise In last September, you know it was a great event, with 300 of the coolest cars and trucks in this area. It was so successful that we’re doing it again in 2012–one in the spring and one in the fall! Our first Cruise In will be held April 21st, from 4-9pm and we plan to block off even more surrounding streets, because we expect more cars, and more people to check it out! We’ll have an open house, and our neighbors at Coker Tire and Honest Charley Garage will also be providing free tours, which will include the Coker Tire Museum!

We’re gettin’ fired up about the upcoming Cruise In, so we just wanted to make sure you guys knew about it and make plans to join us. We’ll have a bunch of awesome food, from our neighboring restaurants, as well as local food vendors. Live music is also part of the fun, and we’ll be having a drawing for one of Coker’s Monster Cruiser bicycles…if you’ve never seen one of these things, they’re extremely cool! Oh and by the way, the Monster Cruiser is a $700 value and all you have to do is sign up at the show to be entered in the drawing!

In addition to all this, we plan to have Hudlow Axle join us for the evening, and they will be bringing their incredible Monster Truck to be on display. Corky Coker will also have his 1911 Marmon Wasp on display in the front parking lot. We’ve already worked out a deal with a few car clubs to set aside special parking, including a bunch of cool Volkswagens that will be cruising downtown to join us from the Bug-A-Paluza event, which is also happening on the weekend of the 21st.

If it’s your first time joining us, the cruise in is held downtown Chattanooga. The entrance for the cruise in is at the intersection of Main and Chestnut Streets, and the actual address of Honest Charley Speed Shop is 1309 Chestnut Street, in case you’re using a GPS or any of those new-fangled devices. For more information and updates, check out Honest Charley’s Facebook page by clicking here!