Last week, we told you about the high tech Ford EcoBoost engine and massive overdrive transmission. This week, we’re gonna show you what it took to put this twin turbo V6 into the 1951 Ford engine bay. And believe us, it was more than simply welding some new mounts into place! Continue reading to find out how we did it!


The idea of putting this engine into a ’50s classic presented a variety of challenges, but the first on the list was making enough room to actually mock up the engine and transmission. For this, we cut a big hole in the firewall and trim the floor pans. We fabricated a new recessed firewall, as well as a transmission tunnel after doing some studying on driveline angles and all that good stuff. Delton and Richard fabbed up some new engine mounts and relocated the transmission crossmember on the Fatman chassis. Then it was a matter of making the necessary adjustments to fit the exhaust piping and turbo piping. We have it all buttoned up and looking good, so check out a few pictures that show our progress. We can’t wait to torture the rear tires! 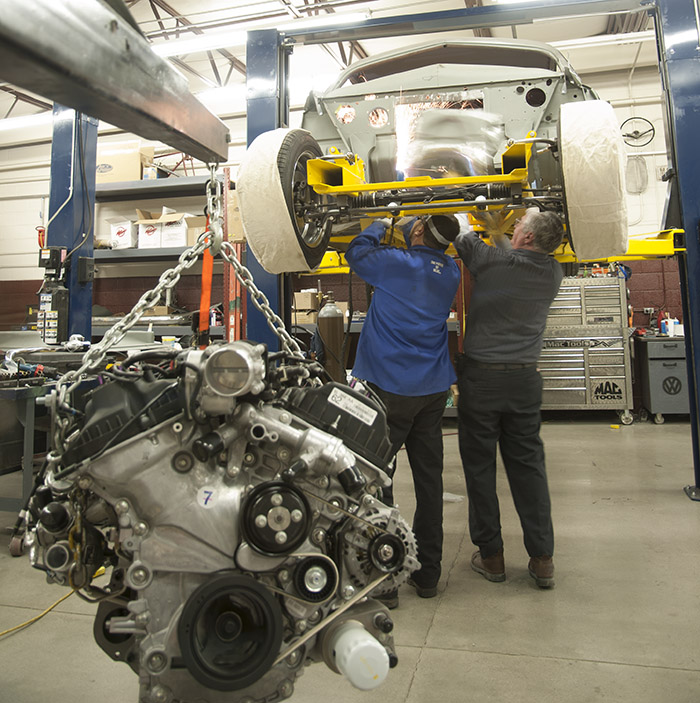 After poking the engine and transmission into its new home, we quickly realized that the firewall had to go! 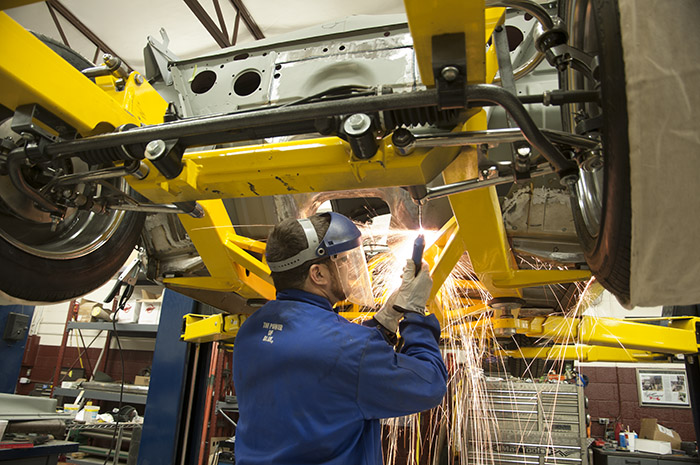 So Richard fired up the Miller Plasma Cutter and cleared out enough real estate for the odd-shaped V6 engine and massive transmission. 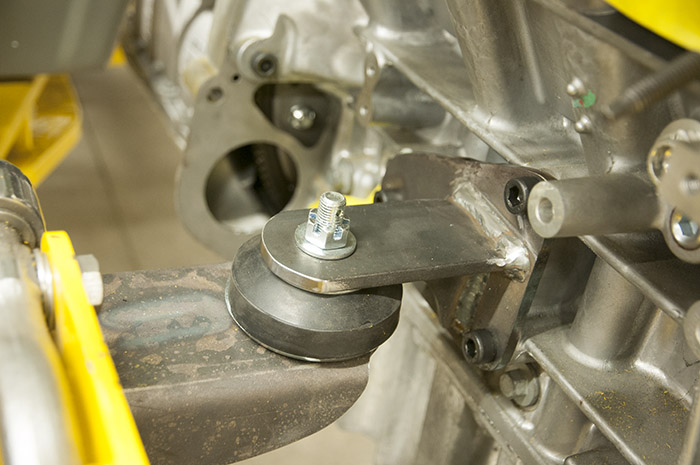 After figuring out the driveline angles and making sure the engine sat level, we fabricated a set of motor mounts for it. Extra gussets and bracing will keep the mounts sturdy. 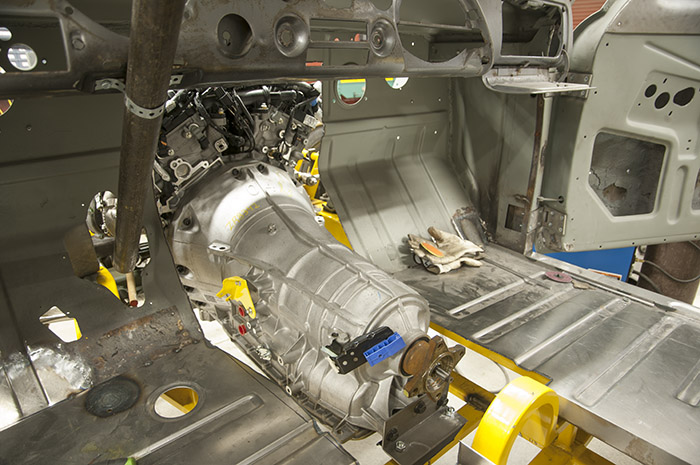 The big Ford transmission sure takes up a lot of space inside the car, so we had to take extra care to leave enough room for the throttle pedal, steering column and brake pedal assembly. 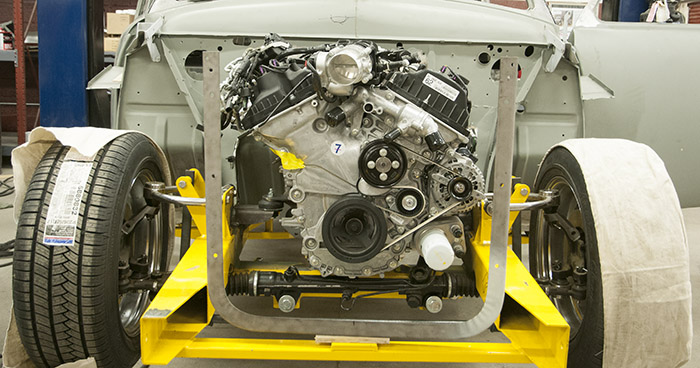 With the engine in place, it is time to figure out the placement for the car’s cooling system, as well as the exhaust piping and turbo piping. We also had to account for a custom air conditioning system. 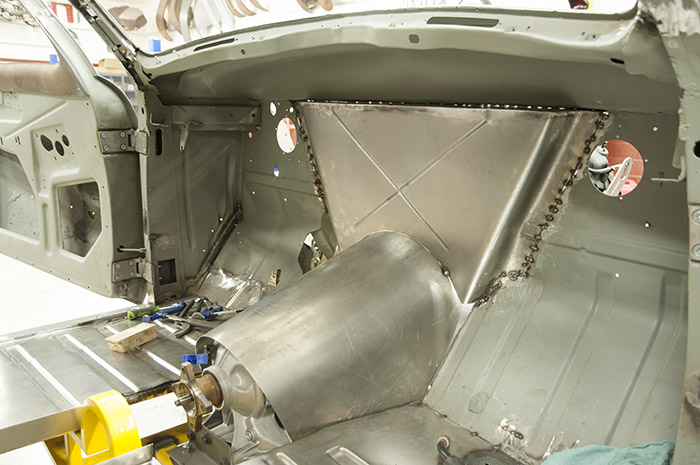 The boys fabbed up a very cool recessed firewall that provides necessary space for the EcoBoost V6. 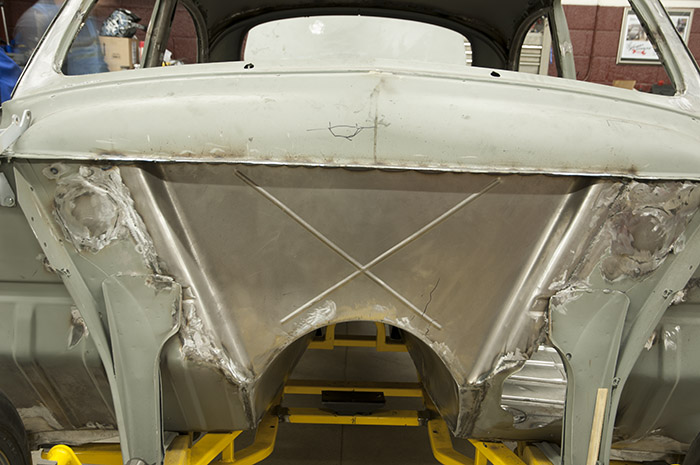 You won’t be able to see the firewall when we install the engine so here’s your last chance to take a look at it! 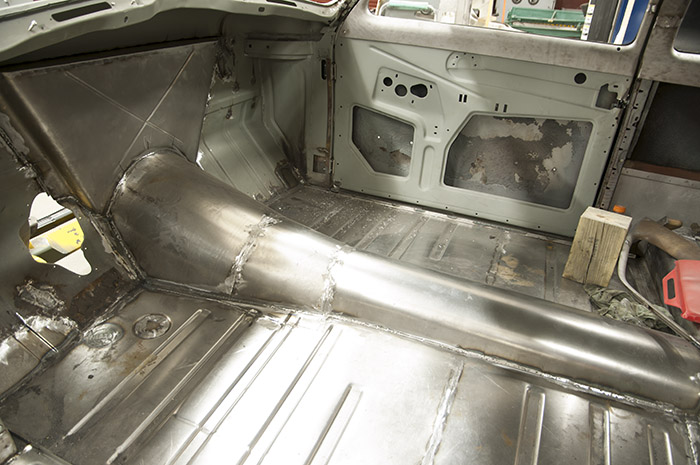 It was nice to finally be able to button up on our floor pan installation with a transmission and driveshaft tunnel. Now we can concentrate on seat and steering column placement. 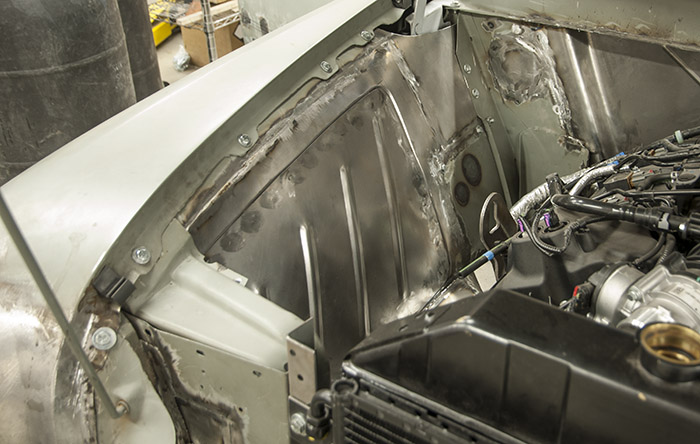 Under the hood, we closed in the engine bay with custom inner fender panels. Soon, we will create the custom turbo piping, so this engine bay will quickly take on a new personality. Next week, look forward to some more major body modifications!!!